The Tale of The Meat Ghost 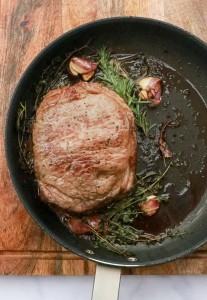 What you are about to read is a true story that happened to the Raulston family.

My husband and I were coming up on our one-year home anniversary of owning an old Victorian home. Throughout that year, our dachshund, Greta, had been staring at the floor, and staring at the oven. At one point in the year, she even tried opening the warming drawer of the oven! The home was a pier and beam house, so we assumed that she was just hearing animals and whatnot underneath the house. We also thought she was going crazy a little bit, but, nevertheless, we just laughed off Greta’s behavior, and continued to enjoy our home.

It was the end of December, and Travis was not feeling well. I left Travis alone for the day while I was showing property, and at the end of the day, I was exhausted as well. I came home, rested on the couch, and surprise, surprise, I became ill as well. One night, Travis made dinner: steak, green beans, and baked potato. He put a steak, potato, and green beans, on each plate. I came home from work, and as I was getting ready to relax for the evening, my husband told me

“Kelly, you need to be more careful, you knocked one of the steaks off of the plate, and it was sitting on the counter”.

Now, mind you, we both were not feeling well, and our brains were a little fogged. So I thought to myself, “Hmmm, I don’t remember knocking the steak off the plate, but maybe I did, ah, it’s fine”. So I grabbed my plate, decided I did not want to eat the potato, took the steak, scraped Travis’ green beans off his plate on to mine. I sat down, and ate the steak and green beans.

The following day, Travis and I were feeling a little better, and so we decided to go for the evening for a little bit. We also decided that we were going to have pork chops for dinner, so Travis had four porkchops sitting out in a glass dish marinating. I asked him if we should cover the dish, and Travis said,

“No we will be fine, we will only be gone for an hour.”

We left the four porkchops uncovered and left the house.

He looked at the porkchop, he looked at me, and Travis started looking in the bedrooms to see if there was a small raw meat-eating human inside our bedrooms. Hey, there are weird people out there. There was NO ONE in the house other than Travis, Greta, and myself. Then Travis came back to me, and for a split second, we thought our house was haunted. Again, we lived in a very old Victorian home, and Greta had been acting weird. I thought to myself “How could I let us buy a haunted house, I am a real estate agent!”

Then, we came to our senses. Travis got is flashlight out, and looked at the top of our stove… THERE WERE RAT FOOTPRINTS ALL OVER THE STOVE. Then, Travis decided to pull the oven away from the wall, and the previous seller did not put an outlet cover on the outlet. And then we saw it.

A HUGE BROWN DISGUSTING RAT. I screamed. Greta started freaking out because she wanted to get the rat. I grabbed Greta, ran into the other room, and climbed on top of a trunk we had. Travis yelled for help, and I realized, that I was married, and I HAD to help Travis.

So, I climbed off of the trunk, came into the other room, and the rat was gone. Travis and I thought the rat went back into the open outlet. We were completely freaked out by the whole ordeal. Greta looked at us like

Hey parents, I literally have been giving you indicators ALL YEAR LONG. But did you believe me!?!? NOO!!

Here is the worst part. I, Kelly Raulston, ATE A STEAK THAT A RAT MOVED FROM THE PLATE. It still freaks me out to this day.

So, I mean, we had to eat dinner. We threw the porkchops away, preheated the oven to 400 degrees, what the recipe called for, and made dinner. The following day, we called a pest control company, and we put an outlet cover on the outlet. They put all the pest stuff out, and we moved on with our lives. But then, the house began to smell. The pest control professional said that there may be an odor because we were a pier and beam house. But the scent got worse and worse. Travis decided to pull the oven away from the wall.

Then, we saw it. We thought the rat went back into the wall. The rat had crawled into the back of the oven (exterior), and WE COOKED IT AT 400 DEGRESS. Travis and I decided the oven was “forever unclean”. We immediately went to Home Depot, and told the rep (who became one of my very dear friends), that we needed to leave with an oven THAT DAY. We got a new oven, got rid of the old one, and the “Meat Ghost” was no more.

What I learned from this:

I truly hope you enjoyed this story. This is one the stories our friends love us to tell and re-tell again and again!

“Reliable and Ready” REALTOR® since 2016. I was born in Monroeville, Pennsylvania, but was raised in Texas since 1997. When I found out we were moving to Plano, Texas, I remember looking forward to riding a horse to school and a brand-new pair of cowboy boots! Growing up in Plano prepared me to be competitive, quick, and to have a strong work ethic. I graduated from Stephen F. Austin State University in Nacogdoches, Texas. Axe’em Jacks! That is where my love for East Texas began. The nature, warm smiles, football games, and community values can't be beat! I graduated summa cum laude with a degree in Interdisciplinary Studies. I was a middle school math teacher in Tyler, Texas. I met my husband, Travis, in Sunday school, and we have been married since September 2016. I love being a REALTOR® in East Texas! Relationships are genuine, the area is beautiful, and the market is rockin’! I am an involved REALTOR® to better the community. Some of the organizations I am involved with are: The Professional Development Committee, Texas Real Estate Political Action Committee, and Tyler Educational Networking Group. Some awards I have won were “The Hustle Award” in 2016, and “Rookie of the Year” in 2017. When I am not working with my clients, I like to spend quality time with my friends and family doing the following: running, target practice, read and participate in book club, and playing with my dachshund Greta.
Prev:  After Home Showing Checklist
Next: Snowmagedon Items That I Will Ensure I Have for 2021-2022
All News